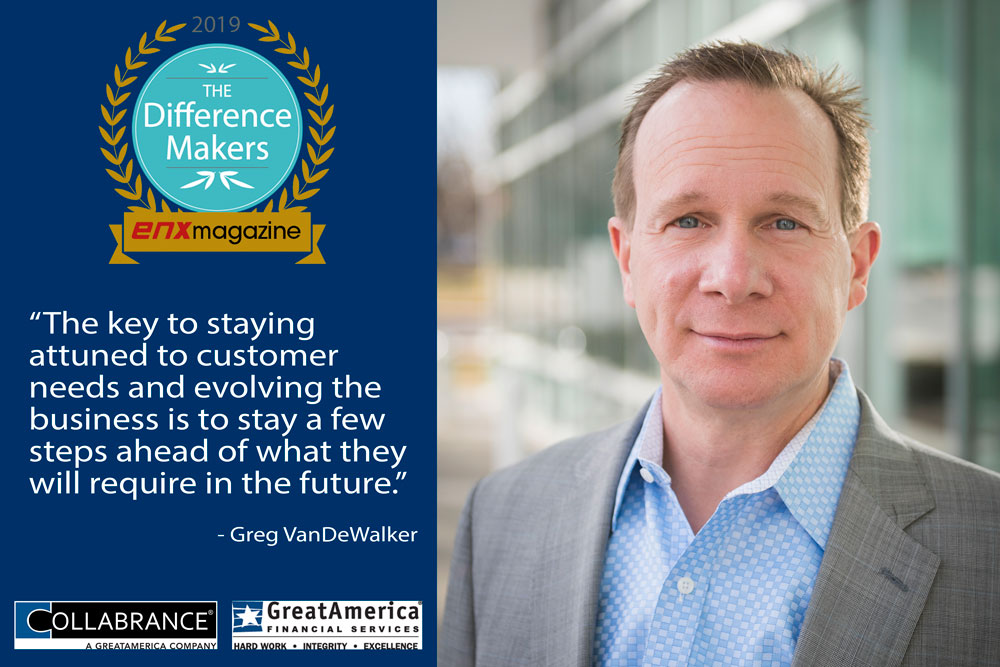 Thoughtful and analytical, Greg VanDeWalker is one of the most intelligent members of the office technology stratosphere.

The senior vice president of IT channel and services for GreatAmerica Financial Services and Collabrance, VanDeWalker spends a good deal of time crunching numbers. However, it is his ongoing quest to find solutions not only from a dollars and cents leasing standpoint, but also to devise a plan that best suits the client's overall objectives, that adds fulfillment to the roles he serves.

"I get to be involved in two business units at GreatAmerica—our IT leasing group as well as our services business unit, Collabrance," said VanDeWalker, a 2019 ENX Magazine Difference Maker. "They are two different business models that serve the same channel, so I am able to leverage ideas to serve both businesses."

It was the leasing side of business that brought VanDeWalker into the industry. A former accountant with Arthur Andersen, he spent 11 years with Business Credit Leasing (later acquired by US Bank), a general leasing company. During his time there, the company decided to focus its efforts on the office equipment industry. That opened a window to GreatAmerica Financial Services, for which he has served in numerous capacities, culminating with his current, dual roles.

In 2010, roughly seven years after joining GreatAmerica, VanDeWalker served as the inaugural chair of CompTIA's MPS Community. While there, he helped spearhead the formation of the MPS Trustmark.

For VanDeWalker, some of the greatest satisfaction has come from making connections with people and companies within the industries he's been involved in. "Over the years, it has given me great joy to help two companies/people get together who may have never met," he noted. "I like meeting new people and learning about what they do and how they help in the channel."

Perhaps VanDeWalker's greatest influence is longtime industry friend Steven Power, who is now retired. The pair spent a great deal of time on the road, attending numerous events. Power was exceptionally skilled at giving presentations, and VanDeWalker picked up many tips along the way to augment his own presentations.

The past year has been an exciting time for VanDeWalker. Collabrance evolved its managed security services provider (MSSP) offering for the channel, which called for a great number of contributions in a condensed time frame. In an effort to show IT solutions providers how to market and sell cybersecurity, Collabrance hosted an MSSP Accelerator event earlier this month, with another slated for September.

In building for the future, VanDeWalker feels the key is staying attuned to customer needs and evolving the business to stay a few steps ahead of what they will require in the future.

"The goal for the foreseeable future is to continue to grow at a fast pace," he noted. "We have very talented people throughout the entire organization and they are all committed to making Collabrance not the biggest, but the best master MSP in the industry."

VanDeWalker and his wife, Emily, have been married for 25 years. They have six children, who are being home-schooled through eighth grade. "One of the reasons we do that is so we can then travel to the part of the world we studied together," he said. "Our kids have been exposed to many cultures around the world, with the hope of giving them a love to learn and see the world for themselves as they become adults."

Master MSP Knowledge Base A Holistic Resource for IT Providers Collabrance LLC, a GreatAmerica Company, launched a new customer portal as a holistic resource to help MSPs enhance their IT business, scale faster, and assist with deeper training with its more comprehensive knowledge base.

Hannah O'Donnell, Director of Sales at Collabrance, was selected by CompTIA as their 2020 ChannelChanger Winner. The ChannelChanger Award is earned by an individual who has shown success or originality as an entrepreneur or industry professional, is channel focused and has made an impact on the channel strategy for their company in a demonstrable way.